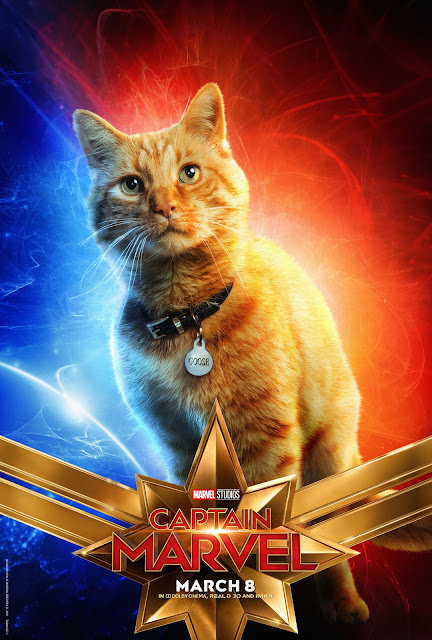 I will not be mentioning any of the social politics and whatnot that surrounding the marketing and lead up to the release of Marvel Cinematic Universe’s 21st film, Captain Marvel. I don’t think it should hold any weight on how the film turned out. Though I will note it did rile everyone up and all sides were probably in some way in the wrong.

All the films surrounding The Avengers films lately, aside from Spider-Man Homecoming, have been utterly average at best. Black Panther, Ant-Man and the Wasp and now Captain Marvel. While all of these are perfectly okay films and worth a watch, they’re not ones that you really need to give a second look, because they just don’t and won’t hold up. Even the mediocre Dr. Strange had some of the most visually impressive CGI in the MCU behind it. Lackluster narratives, copious mediocre to bad CGI, so-so acting and just a general sense of forgettability, despite everyone’s insistence that these films are amazing and just as good as other entries. I went into Captain Marvel hoping it was another overblown situation, like with Black Panther but the other way around. But to my surprise, all the people calling it a mediocre entry to the MCU, weren’t just disgruntled people, but people like me who just watched a Phase One MCU film in 2019.

Captain Marvel is set in 1995 as Starforce member Vers / Carol Danvers (Brie Larson) is suffering from recurring nightmares about a woman who she has no recollection of. She is still on Kree Empire’s capital planet and goes to meet with her commander Yon-Rogg (Jude Law.) After sparring and being told she needs to control her emotions and her powers, her Starforce group sets off on a mission and are ambushed. Vers gets captured and they probe her mind, allowing her to remember a bunch of places and people from earth. She breaks free, fights her way out, and ends up on an escape pod that crash lands on earth. The next morning SHIELD Agents Nick Fury and Phil Coulson (Samuel L. Jackson and Clark Gregg) are questioning her when Skrull (the people Kree are warring with) attack them and a chase ensues. What follows is the account of Nick Fury and Vers as they journey across the country to try and figure out who Vers is and why she’s here.

We’re going to get the good out of the way because while I think there’s a lot of mediocre in this film, there’s some merit and the film isn’t a complete failure. I quite liked the “buddy cop” narrative between Fury and Vers. It’s the time where Brie Larson shines the most and whenever Samuel L. Jackson is on-screen, it feels like the film gets a shot in the arm. They have legitimate chemistry and these buddy scenes are some of the best in the film. You can lump in Fury’s interactions with Goose in the second half of the film to this as well. I thought the “twist” was done decently well too. It’s not one that you don’t see coming, but it’s effective in the constraints of the narrative. I also thought the de-aging of Coulson and Fury were done well, or at least better than whatever Star Wars has been doing. Not to mention the Stan Lee opening as well as him reading a Mallrats script on the train were great touches in the live action film since his passing.

My problems begin with the story and plot. The first part is vastly removed from the second part and the climax is like throwing a rubber bouncy ball in a racquetball room. Like with Bird Box last year, I dislike films where you’re jumping around the narrative or having the viewer fight with the main character’s amnesia or what have you. I get they wanted the big twist in the middle, but this movie could’ve started out with the twist and it wouldn’t have changed the narrative much at all. Vers still has amnesia and the viewer isn’t left in the dark. Look at me, armchair directing here, like I know everything. Conversely, jumping from Space Force raid, to buddy cop film, to Dragon Ball Z arc finale is jarring. Most Marvel movies, even ridiculous over-the-top ones like Guardians of the Galaxy have a structure that works within the narrative presented. Captain Marvel does not do this and it feels disjointed. Like three different parts from three different scripts were pieced together. It’s not outright bad, but it’s also not the best MCU origins film either, it’s just lackluster.

This takes us to the characters and acting, because as much as the Jackson + Larson combo works, Larson on her own really doesn’t do it for me in this film. She reminded me of Chris Hemsworth in Thor. Mega powerful and can kick ass, but in the constraints of the film he’s watered down and only shows glimpses of freedom of character. This is how I feel about Brie Larson, as she has some decent solo moments, but is very stiff and forgettable. I also don’t like how she just has powers, never really struggles with her powers, then in the end poof she’s Superman tier. I get the “control your emotions padawan,” but man that’s such a boring way to let us see her growing with her superpower. I don’t really watch trailers before films nowadays since I want to try and experience films fresh, but if I had known Jude Law was in this, I would’ve been worried. Because hands down he’s probably one of the worst MCU villains. I cannot name a single moment where he was effective as a character.  Vers friend Maria Rambeau (Lashana Lynch) is just kind of there and I only remember the part where she said she was going to put her foot in the ass of some dude. And for some reason at the end knew how to fly and alien spaceship. I guess, because she was in the Air Force it all works the same. She’s just another fine in the moment, but forgettable character. Ben Mendelsohn as Talos was pretty alright as well, just a solid enough character. The rest of the cast like Dijmon Honsou as Korath and Annett Benning as Mar-Vell were equally as “they're on the screen at times.” All these people are okay in the film, but thinking back I’m only remembering Larson, Jackson and Goose parts.

I didn’t like a lot of the humor as well. Even though the dynamic between Larson and Jackson worked quite well, there’s a lot of forced humor that didn’t go over well. Don’t get me wrong there are a lot of chuckle-worthy moments and decent gags, but a lot of it fell flat for me. The Goose stuff was probably the most effective use of humor in the film. Sam Jackson and a CGI cat shouldn’t work but it does. The score and music also didn’t really work for me either. I keep thinking about Guardians of the Galaxy and how it had a perfectly crafted soundtrack that worked with each character and scene. This did not have that good of an OST, like with the humor, the songs felt forced and its score was lackluster overall. I think films like this try to recreate the magic of Guardians of the Galaxy and it never works out. I’m comparing this to a lot of other MCU films, but it really does feel like it tried to take elements from all over the place and it just did not work. I can live with so-so acting and a barebones story and narrative, but if I must listen to bad music along side that, it really takes me out of it.

This finally brings us to the CGI. As I mentioned above, I quite liked the de-aging done in the film and it didn’t detract from either character for me. But the rest of the film was pretty…shaky. Alright that pun didn’t need to be made, but man there is a ton of shaky cam in this one. The action itself, well I couldn’t name really any memorable action aside from the old lady getting punched and the climax, which is my one big gripe about the film. If I’m going to see a big budget MCU action film, give me some memorable, non-shaky cam, non-let’s poop out all our CGI budget on the climax, action. I don’t care about the airplane stuff, the hand to hand combat stuff wasn’t well choreographed. I swear to God the mission they went on to start the film was shot and CGI'd with a sticky note telling them, “no lighting allowed, make them squint.” The climax wasn’t even done all that well, but it was better than everything else in the film. I will say at least the CGI was better in this than in Black Panther, I think.

Despite me lamenting Captain Marvel is lackluster for about four paragraphs there, it’s still nowhere near the worst superhero movie we’ve had come out in recent years. For all its lackluster, it’s still a fairly enjoyable watch. For a two-hour film that I had this many quandaries with, I really only thought the middle slogged on. Though I wouldn’t re-watch this anytime soon and I’m really hoping it isn’t just “Captain Marvel does all the work in Avengers: Endgame,” you could do much worse with your time. If not for Samuel L Jackson though, I’m not sure this would even be watchable.