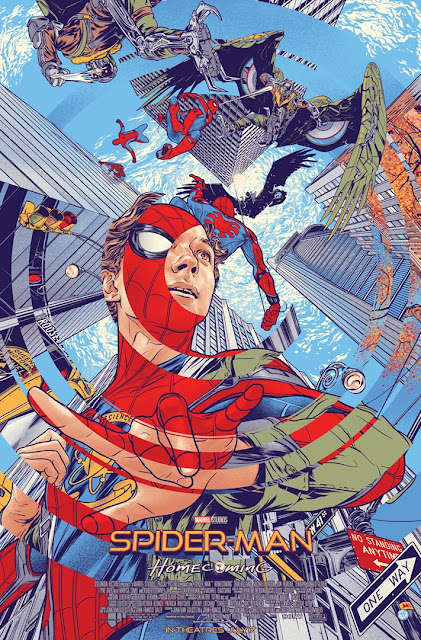 Sony's back with Spider-Man, head for the hills! Wait, Andrew Garfield is gone? Yes, no more emo Peter. Marvel is in control of the film? They haven't outright failed with an MCU film yet. Was it better than Rami's first couple of films? Yes and no. Well hell yeah then! "Spider-Man: Homecoming" is the second foray of Peter Parker into the Marvel Cinematic Universe. His first appearance being in "Captain America: Civil War" was stellar. Tom Holland is someone who was an unknown going into the MCU and now he's a bonafide star. The rest of the cast was pretty alright, the story was kinda bare bones, the CGI and action are okay, while the emotion and humor are top notch. As an MCU origins film it's one of the better ones. The original Iron Man still tops the list, but I'd put this film just ahead of Ant-Man and Dr. Strange.

"Spider-Man: Homecoming" is set after the events "Captain America: Civil War" and follows the story of Peter Parker / Spider-Man (Holland) as he juggles school, life, superpowers and hunting down Adrian Toomes / Vulture (Michael Keaton). We open with Toomes and his construction crew cleaning debris from the wreckage after the Battle of New York, they get booted from the job as the government is taking over the work. They end up with a piece of alien tech and decide to start up a criminal organization. Jumping to present day, we learn that Tony Stark (Robert Downey Jr.) doesn't think Peter is quite ready to be in The Avengers, so he resumes his studies at school, where he recently departed the decathlon team, against Aunt May's (Marisa Tomei) wishes. One night after Peter stopped Toomes men from robbing a bunch of ATMs he sneaks back home only to be greeted by his best friend, Ned (Jacob Batalon), finding out his secret identity and wanting to be his 'Guy in the Chair.' With the school abuzz about Spider-Man the two get invited to a party held by senior Liz (Laura Harrier), who Peter likes. Peter leaves the party to get some air and notices a fiery blue explosion in the distance and saves a local gangster, Aaron Davis (Donald Glover), from more of Toomes' men. Thus begins Peter's hunt for Toomes, because he realizes that he is a bigger threat than Tony and Happy (Jon Favreau) think.

The first thing you notice about this film is that it has a character driven tone, alongside humor and emotion, with action sprinkled in. Peter Parker, played superbly by Tom Holland, is introduced to the MCU with a bang. You learn about his knowledge from his decathlon prowess, his humor and wit from any encounter with anyone and his emotion from most of the final act and his interactions with Stark. Peter Parker is a great character and I think playing the younger 15 year old fits the big screen much better than the older Parker from Rami's films. Elevating the character is the performance by Tom Holland. He's gotten the comics version of Parker down better than Tobey and the overall character much better than Garfield. The Spidey quips are on point as well, better than Deadpool, fight me. We also get a great character in Adrian Toomes played by the great Michael Keaton. Toomes isn't just a bad guy being a blackmarket-like dealer because he's evil. We learn why he becomes what he does, the government taking one of his biggest jobs, he is loyal to his crew--for the most part--and puts his family before anything else. He also doesn't mix work with play. Toomes is one of the more interesting villains because he's not hellbent on taking over the world like almost everything else in the MCU. The earth isn't at stake or anything of the sort, but the menacing of Vulture and his crew, if left alone, is not lost on Peter. Michael Keaton is superb as Toomes / Vulture, he's one of the best villains/characters in the MCU. He feels real and has conviction, not to mention he's one of the best acted villains, right up there with Loki. Showing you don't have to be a big-time baddie to hold weight. Plus, Peter and his interactions throughout the film are spot on.

The rest of the cast is okay. What more is there to say about RDJ as Tony Stark? He's got charisma with everyone, although I want more out of him and Spider-Man since his and Hollands rapport is off the charts. Favreau always has a fun role in these MCU films as Happy, especially when you have Stark razzing him all the time. Marisa Tomei is far too beautiful and it's quite distracting thinking of her in that way as Aunt May. But the character works because Peter is really young, so Aunt May can be younger too. The younger guys around Peter for most of the film are okay. There's not enough of Zendaya as Michelle Jones, but she's got some good comic relief (and possibly a Taylor Swift shirt at one point). Donald Glover's small role as a gangster is fun and his couple scenes with Spider-Man is funny. The same with Hannibal Burress' bit role as their PE teacher, like I mentioned this film has legit laughs. Ned is great comic relief and a great friend to Peter from start to finish and is played well by Batalon. "Do you lay eggs?" I hope they finally finish that LEGO Death Star model. Harrier as Peter's love interest Liz is okay, and seeing Flash Gordon (Tony Revolori) as a smug rich kid bully was kind-of weird. I'd be remiss if I didn't mention all the hilarious Captain America PSAs throughout the film as he tries to teach kids how to be moral like himself. "So your body is changing, I know how that feels..."

The story itself is pretty basic, but the characters and emotion elevate it. Without Holland, Keaton and RDJ this could be forgettable. Holland, especially in the final act, carries the film and the scene before the air heist showcases emotion not usually shown in the MCU. The dialogue is fast paced and full of humor and life. The opening vlog with Peter going through the events leading to the Civil War fight and to present, is a great opening to the film and really sets the tone. Not only that, the Keaton scenes have an air of malice behind them. Finally, the RDJ and Tomei scenes are like watching a couple parents trying to help out a growing boy. If you've seen a MCU origins film this isn't too much different. What sets it apart is a couple twists and great charisma an emotion from Holland and Keaton. The action is alright and despite what people say, the trailer does not spoil the whole film, it's a little deeper than something like "Transformers." The neighborhood chase scene, the bank robbing scene as well as the final set piece are all pretty good. There's a few wide-shots during scenes in the film that I thought were awesome. The music is fun and Marvel is doing great with all their scores and OSTs this year. The CGI is okay. The Spider-Man suits are look great, the scene where he's getting to know Karen (Jennifer Connelly) is another example of the character building in the film too. The closing line of the film is pretty fitting as well. Just about everything is this film is fun and there's not much that is "bad" that's worth nit-picking over to me.

"Spider-Man: Homecoming" feels a lot like "Iron Man" from way back now. A great film that introduces a huge charismatic hero that will be with us for years to come. Peter Parker / Spider-Man is an awesome character, and while it may not be better than say "Spider-Man 2," as a whole I think it captures the essence of Spider-Man much better. As I've echoed this is funny and more emotional than most of the MCU films. Tom Holland is great, Michael Keaton is awesome and the rest of the supporting cast doesn't detract. I'm looking forward to more Spidey interactions with the rest of the MCU going forward, there are so many awesome potential combos with people. Because lets face it, Spider-Man is the best Marvel hero.