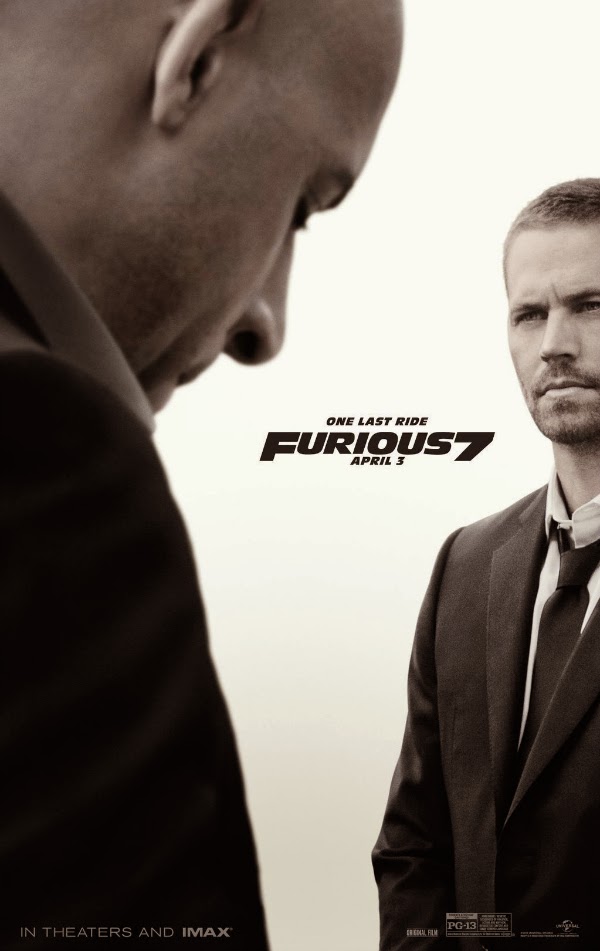 Boy, it's been quite awhile since I've done a review. Sorry about all that. Been big time busy with school and haven't had much time for "new" films. The only two I've seen, that would be worth my time writing about, have been 'Cinderella' and what I'm writing now, 'Furious 7.' (Or 'Fast 7' or 'Furious Seven' or 'Fast & Furious 7' or '7ast & 7urious.') Ever since I was a teenager I've been aware of these souped up car racing films. The first film is still a pretty campy, but fun, watch. The series took a nosedive, at least until 'Fast Five' came out in 2011. The series was turned into the most over the top action films, that included the most flying cars we'll ever see in our lives, barring the creation of hover-cars from 'Back to the Future.' 'Furious 7' is a star driven powerhouse where Vin Diesel isn't (as) robotic anymore, Paul Walker is wholly memorable, Dwayne Johnson aka The Rock brings a humorous bad-ass attitude while newcomer Jason Statham brings just plain badassery. Round out these four with Kurt Russell, Michelle Rodriguez, Ludacris, Tyrese Gibson and Jordanna Brewster. Combining these actors and you have a star studded cast and crew that will bring the action while charming the hell out of you.

'Furious 7' follows the story of Dominic Toretto, Brian O'Connor, Letty Ortiz, Roman Pearce and Tej Parker (Diesel, Walker, Rodriguez, Ludacris and Gibson) as they seemingly embark on their last ride as a crew. In the previous film, Owen Shaw is taken down and we open with his older brother, Deckard Shaw (Statham), swearing vengeance on Dom. One night, Deckard breaks into Luke Hobbs' (Johnson) DDS office. A fight ensues between the two culminating in Deckard setting off a bomb, destroying the office and leaving Hobbs in the need of a hospital. Later on, Dom learns that Mia (Brewster) is pregnant and is worried that Brian is having a tough time staying away from this old life. While they're having this conversation, a box from Tokyo, disguised as a bomb, is detonated and destroys the Toretto's house right after Han (Sung Kang) is killed by Deckhard, who is in Tokyo. Dom talks to Hobbs at the hospital, where Hobbs tells him to go after him and to "not miss." After travelling to Toyko to get Han's things, Dom comes back to a funeral for him. During the funeral he spots a car lurking and gives chase. It turns out to be Deckhard and the two have a stare down before Deckhard is chased off by a covert-ops team. Their leader, informs Dom that he is Mr. Nobody (Kurt Russell) and asks him to come with him. Mr. Nobody, who we know now is Frank Petty, offers Dom the chance to be able to track Deckhard wherever he is on the globe, with a device called "God's Eye." All he needs him (and his crew) to do, is rescue a mysterious hacker named Ramsey (Nathalie Emmanuel), from a mercenary named Jakande (Djimon Hounsou) and Dom will be well on his way to exacting revenge on everything that Deckhard is doing.

This film is bonkers from start to finish and I loved every minute of it. I loved the look of this film more than anything, because it, yet again, didn't feel like a car film, it felt like an action film with cars. The same feeling the last two films have oozed. We get a callback to the opening of the series as a whole, with a race in the desert. Then everything kicks in as we're thrown into actual character development, between Dom and Letty and a fantastic tone-setting fist-fight between The Transporter and The Rock. The funeral scene is good and from there on the action never slows down. Car chases through LA, Eurasia and the middle east, are combined with thrilling hand to hand combat, surprisingly funny and heartfelt dialogue, beautiful backdrops and scenery, while giving us a well written story taking us all around the globe. The music is filled with current hits, but they never really seem annoying. Even if the songs are pretty bad overall. The use of Wiz Khalifa's "See You Again" is astounding, though it's the chorus by Charlie Puth that hits home. The rolling camera during the hand to hand fight scenes was awesome, for the record, and provided some of my favorite shots in the film. Never fear though, because the destruction was immeasurable (actually there was over 230 cars destroyed making this), the fighting brutal and the acting as good as ever in the series.

No longer is this series about petty love triangles and fast neon hatchbacks and muscle cars. The issues with each character are more relatable, growing up and having a family, hoping the person you love remember memories after a horrible accident and yes, even being the "double alpha." The cast handles this well and this may be the best film in the series, by a long shot. Vin Diesel doesn't seem like Vin Diesel, Paul Walker is given a heartwarming send-off, The Rock is just pure entertainment, stealing each scene he's in, while Jason Statham proves he can still be awesome in an action role. Where this film falters for me, at times, is the flashbacks regarding Letty. I understand why, but multiple times in the film was too much for me. Despite this, Michelle Rodriguez is great as Letty and the supporting cast as a whole is great as well. The thing is though, I don't really have any other problems with this film, despite me knowing there's a litany of them. The 'Fast & Furious' series has turned into the ultimate popcorn films and ones that work about a millions times better than 'Transformers' or 'The Expendables.' What other film, could there ever possibly be, that combines the talents of The Rock, Vin Diesel, Ronda Rousey, Jason Statham, Paul Walker and  freaking Kurt Russell! All while still coming out with a competent overall story, scintillating action and genuine emotional connections? That's right 'Furious 7' is that film.

'Furious 7' is, so far, by far, my favorite film of 2015. Granted the year is still getting going, but it honestly hasn't been too outstanding. James Wan, one of the best under the radar directors of the past decade, has pushed this series, with this film, to the best it's ever been. The two hours this film runs flies by and you're never thinking about anything but the action going on. The action is mesmerizing, the acting is good, the writing, while campy at times, is really solid and the overall product presented is ultimately feelgood all around. Not to mention the ending, and the handling of Paul Walker's untimely death, is impeccable and almost tear-jerking. There's no reason, if you're a fan over the top, "turn your brain off," action flicks, to miss this. 'Furious 7' could be the best action film of the year, only time will tell.