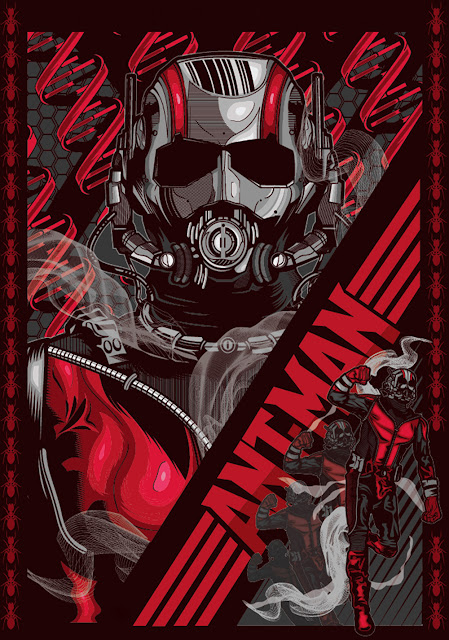 Superhero films, especially ones that are going on in the current Marvel Cinematic Universe, can be put into to tiers in my eyes. The upper tier has The Avengers, Iron Man and Captain America films. While the lower tier has Guardians of the Galaxy, Thor and now 'Ant-Man!' I'll admit I was pretty skeptical of this film and thought it would be just be an okay film much like the two Thor films. Paul Rudd is great and Michael Douglas is a legend, but it was hard not to think that this could be the first of the MCU films to be underwhelming. Ant-Man, despite being an original Avenger in the comics, he's only now getting time to shine in the MCU. The wait was worth it as this pseudo origins story hearkens back to the fun of the first Iron man film, but on a much smaller scale.

'Ant-Man' follows the story of Scott Lang (Rudd), a thief who means well, as he is released from prison after serving a three year sentence. He begins to live with his old cellmate Luis (Michael Pena) and is genuinely interested in turning his life around. Flashback to 1989 and scientist Hank Pym (Douglas) is infuriated when he finds out S.H.I.E.L.D. is trying to replicate his Ant-Man shrinking technology. He believes that it is dangerous and needs to be suppressed. Back to present day and Lang is having trouble finding work, Luis gets a tip that there's a millionaire that will be gone from his home for a week. Lang caves and he and his crew begin to rob the house, which turns out to be Pym's. After cracking the safe in the basement, Lang only finds the Ant-Man suit and takes it. The next day he puts it on and shrinks himself and --with Pym in his ear-- takes a tumble from his apartment all the way to the street. That night, while putting the suit back in Pym's house, the cops are called and he is arrested. Knowing that if he goes back to prison, he'll never see his daughter again, Lang is in a bad place, until Pym visits him and gives him one more chance and the suit. When Lang escapes he is informed that Pym's protegee Darren Cross (Corey Stoll) has weaponized the Ant-Man formula (now Yellowjacket). Pym's estranged daughter Hope van Dyne (Evangeline Lilly) is his right hand man. Now Lang and Pym must team up to get the YellowJacket suit and keep Cross from giving it to the wrong people.

This film may not be on par with some of Marvel's best superhero films of the past couple years, but it's also easily one of the most fun films in all of the MCU. Ant-Man is an absurd concept when you look at it. The ability to shrink down and have the comparable strength of ant is awesome. But, that's not where things end. Not only does Lang have the strength of an ant, he also has the power to communicate and control ants. This is demonstrated all throughout the film in some of the most fun sequences in the film. From Lang learning about all the different types of ants, running underground with them and then eventually using them in this heist, we get to see it all. Flying around on 'Antony,' using fire ants as a raft or ladder or flying in a swarm like an attack squadron are only some of the ways we see Ant-Man's abilities. These are some of the most fun and innovative points in 'Ant-Man' and we're just scratching the surface. The CGI overall is pretty good, I opted not to see this in 3D, but I can't help but think the 3D is probably pretty solid in this. The shrinking is seamless and looks good. When small the world around looks fantastic, everything doesn't just look "big" and you feel like you're running through a field or in an ant colony or inside of a computer. The combat while small is a high point as well. Lang jumping around slamming thugs, the fight with Falcon (Anthony Mackie) and the final fight with Yellowjacket are done superbly. Not to mention the trippiness that came with Lang going subatomic later in the film. Full of action blended with great humor, Ant-Man's comedy is on par with any of the other Marvel films, but less reliant on "one-liners and out of place puns. Thomas the Tank engine's cameo is hilarious.

I'm still not quite sure how much of Edgar Wright's original script, before he left, made it into the film, but there are a lot of parts, especially the humor, that you could tell was crafted with some care. With the amount of different writers going into this final script Wright, Adam McKay, Joe Cornish and Paul Rudd, I was skeptical of how everything would flow and how the overall story would end up. Luckily, the heist angle, the origins of Lang becoming Ant-Man and the father daughter story lines between Lang and Cassie and Pym and Hope all came across pretty well. The overall heist angle comes across as an 'Oceans 11' type story, which is pretty fun. As I mentioned above, Lang becoming Ant-Man and learning how to use the suit is some of the best parts of the film. While the father/daughter story lines aren't fully fleshed out between everyone, the heart was there and watching the progression throughout the film is pretty good. The acting is a big reason everything worked so well. Paul Rudd is perfect for this role and fits the style of Scott Lang well. His subordinates, who include Michael Pena and T.I., are pretty great comedic relief throughout the film. I'm looking forward to more Michael Douglas as Hank Pym and Evangeline Lilly as Hope van Dyne (aka Wasp) as they play their roles expertly. Even Corey Stoll plays a solid, albeit one note, performance as David Cross. The writing and effort by the cast make this a film that will surprise a lot of people. The ending, mid and post scenes left me giddy for 'Captain America: Civil War' as well.

'Ant-Man' is a film that doesn't break new ground in the superhero genre, but does everything so well it's hard to find any glaring problem. The film is slow starting, but once it kicks in, it's a fun ride. Paul Rudd and Michael Douglas are a team that works so well together. Alongside Evangeline Lilly these three keep the films story rolling at a good pace. The story itself is fun, fast paced and everything you could want out of a Marvel film, all packed into just under two hours. Like with most of Marvel's films at this point, it's probably not going to win over any new fans. But, if you're into the Marvel Cinematic Universe, are hyped for 'Captain America: Civil War' next year, and want a fun film to tide you over, then 'Ant-Man' is perfect for you. Oh, and don't forget, Baskin Robbins always finds out.